Crime scene investigators are often required to wear special clothing when working at a crime scene. This clothing is typically made of white or light-colored fabric, so it does not contaminate the evidence. It is also important for investigators to wear gloves, masks, and other protective gear to prevent themselves from becoming contaminated with evidence. So, what does crime scene tape mean?

When working at a crime scene, investigators often use crime scene tape to secure the area. This tape marks off an area that may contain evidence or where a crime has been committed. It is also used to keep people from entering the area and contaminating it.

If you see this tape, you mustn’t cross it. Doing so could contaminate the evidence and make it more difficult for investigators to solve the crime. If you have any information about a crime that has been committed, you should contact the police so that they can investigate.

What Is Crime Scene Tape, And What Does It Mean?

If you’ve ever seen a crime drama on TV, you’re probably familiar with the image of police officers cordoning off a section of land with bright yellow or red tape. But what does this tape mean, and what are its origins?

Crime Scene Tape is a type of barrier tape used to mark off an area where a crime has occurred. The tape is used to secure the perimeter of the crime scene and prevent contamination by unauthorized personnel. It also serves as a visual warning to passersby that they should not enter the area.

The origins of this tape are unclear, but it is believed to have first been used in the early 20th century by detectives in New York City. Since then, it has become an essential tool for law enforcement agencies worldwide.

So next time you see a scene on TV that’s cordoned off with crime scene tape, you’ll know what it means – and you’ll also know that you should probably stay away!

What Is The Difference Between Yellow And Red Crime Scene Tape?

When the police arrive at a crime scene, they often use yellow or red tape to block off the area. But what is the difference between these two colors of tape?

Yellow tape is typically used to denote an area that contains evidence that could be disturbed or destroyed. This might include blood stains, footprints, or other physical evidence that needs to be preserved. On the other hand, red crime scene tape is used to indicate an area that contains a body or remains. This allows police and medical personnel to quickly identify which areas are off-limits.

Crime scene tapes are mostly used in indoor spaces, such as homes or businesses, but they can also use them outdoors. When used outdoors, this tape is often attached to trees, fences, or other obstacles. This allows investigators to secure a large area with minimal effort.

No matter what color it is, if you see crime scene tape, you should always heed the warning and stay away from the area. Tampering with evidence or disturbing a crime scene can result in serious consequences.

How Is It Used In Investigations And Criminal Proceedings?

Crime scene tape is one of the most important tools used by law enforcement during an investigation. It is used to cordon off areas where a crime has been committed and to secure potential evidence. Sometimes, they can also use it to collect fingerprints or other trace evidence.

Crime scene tape is typically made of paper or plastic and is brightly colored to be easily visible. It is also usually printed with words such as “Do Not Cross” or “Police Line – Do Not Cross.” This helps to ensure that only authorized personnel have access to the crime scene.

Once an investigation is complete, the tape is removed and disposed of properly. Sometimes, it may be kept as evidence in a criminal proceeding. Remember, if you see crime scene tape, it is important not to cross it. Doing so could contaminate the evidence and make it more difficult for investigators to solve the crime. If you have any information about a crime that has been committed, you should contact the police so that they can investigate.

What Are Some Potential Implications Of Having Crime Scene Tape Around Your Property Or Home?

Crime scene tape is one of the most unsettling things in a neighborhood. It usually means something bad has happened, and it can be a real shock to see it wrapped around your property. This tape can also have serious implications for your safety and your family’s safety.

This tape can also make it difficult for you to sell your home, as potential buyers may be put off by the idea that a crime was committed there. If you are selling your home, it is important to factor in the possibility that crime scene tape could deter potential buyers.

While having crime scene tape around your property can be unsettling, it is important to remember that it is only temporary. Once the investigation is complete, they will remove the tape, and things will return to normal. In the meantime, it is important to know the potential implications of having crime scene tape around your home.

You can also read:

How Much Does A Warden Make?

How Long Does A Murder Case Last

Paralegal Salary Colorado: How Much Do They Make? 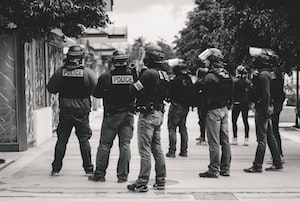